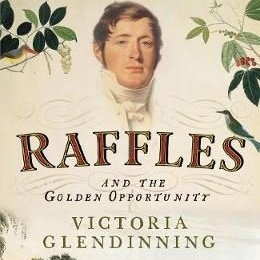 Raffles and The Golden Opportunity

The authoritative biography of the "Father of Singapore''

By the time of his death, Thomas Stamford Raffles (1781-1826) was the founder of Singapore and Governor of Java, having left school in his early teens to become a clerk for the British East India Company. Charismatic and daring, Raffles forged an extraordinary path for himself in South East Asia - refusing to be satisfied with the trading posts available to the British, he defied Dutch governors and wrangled with warring local rulers to establish what is now a world city.
Raffles remains a controversial figure - a utopian imperialist, staunch abolitionist, disobedient employee and a knight of the Realm who died deeply in dept. Renowned biographer Victoria Glendinning charts Raffles' prodigious rise in this new edition, specially updated for the bicentenary of the foundation of Singapore in 1819.

Delivery Charge
Collection & Delivery begin on 16 to 27 December 2021.
Deliveries are available at a flat fee of $25 per location. Multiple locations within the same order will incur the delivery fee based on the total number of locations.
Terms & Conditions

Raffles Singapore reserves the right to replace a product or packaging with another equivalent value, subject to availability.

All above stated prices are in Singapore Dollars and inclusive of 7 % GST. Delivery service charges are applicable.